Variable Definitions:
Housing Stability: The percentage of households living in the same housing unit as they were one year ago

Housing Stability
Housing stability, defined as living in the same housing unit for more than one year, has important impacts on both families and neighborhoods. Frequent moving has been shown to have a negative impact on the educational achievement of children in a household. On a neighborhood level, higher rates of housing stability can lead to more community cohesion and increased participation in community organizations. 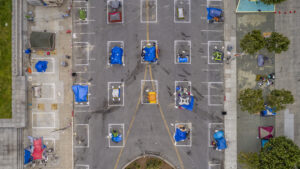